How Cortisol Wreaked Havoc on My Body 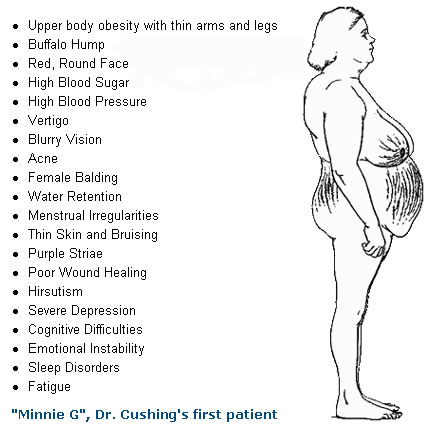 For many years now, I have struggled with my weight.  I realize that I’m not the only woman in the world to have this concern.  Although I am not a sport fanatic, I lead a relatively active lifestyle, often being out and about, “taking care of business”.

Nevertheless, I am conscientious about what I eat, how much I eat, and have very good knowledge regarding calories and nutritional content of foods. More than likely, my biggest weakness is my love of carbonated beverages, although I have always made an effort to choose low-calorie or zero-calorie options.

Over the course of the past several years, and the past two years in particular, I have observed myself growing fatter and fatter.  In particular, this fat has always been fairly localized in upper body weight, leaving my legs and posterior relatively thin and muscular.  However, in addition to this localized, yet prominent weight gain, I have noticed other symptoms over time that I have often discussed with my various physicians:

In addition to the above symptoms there are those that I have not mentioned, but have observed:

When I have mentioned these various problems to my primary care doctor as well as to my gynecologist in the past, they have basically brushed off my concerns as those of a depressed middle-aged hypochondriac woman who merely needed to eat properly and do more exercise.

Out of utter frustration and with strong will to solve my own problem, convinced that there really was something beyond food and lack of exercise affecting my body, I decided to do some serious research on the internet and was extremely intrigued by what I learned.

Firstly, I would like to refer you to the image to the left  of Minne G, Dr. Cushing’s first patient.

When I showed this image to my husband and 2 sons, they literally burst out laughing and said, “Minus the dark stretch marks, this looks just like you!” This statement was quite disheartening, but nevertheless true. Not only did my body look like that in the drawing, but I also had 75% of the symptoms listed in the image.

So what exactly is Cushing’s syndrome and what causes it? Cushing’s syndrome is a hormonal disorder caused by substantially increased levels of cortisol in the body. This natural hormone produced by the body is extremely important in providing good heart function, but in excess, it can wreak havoc on the body and could eventually lead to death.

Next I wanted to better understand the causes of Cushing’s syndrome and learned that it was primarily either medication-based or caused by a benign tumor in the pituitary gland or in the adrenal glands. At the start of my quest, I decided to look into the idea that my Cushing’s symptoms were in fact related to medications that I am taking, but vowed to also consult a reputable endocrinologist.

My findings were nothing less than staggering! Two of the five medications that I have been on for a number of years are known to increase cortisol levels in rats and humans. Specifically,

Although I was not on high doses of either medication, namely 10 mg/day of Escitalopram and 12.5 mg/day of Carvedilol, I am convinced that over time, the increased cortisol levels in my body were leading to Cushing’s symptoms.  Seeing that “my shrink” took me off of Escitalopram in favor of Agomelatine, I was somewhat relieved.

However, I still needed to deal with the Carvedilol. My internet research led me to understand that it was not advisable to stop the Carvedilol abruptly, so I decided to cut it down by a half and observe the effects.  I made this modification starting Sunday, October 20, 2013. I stress the point that I made absolutely no changes in my normal diet or exercise regimen.

On a positive note, Agomelatine (a.k.a. Valdoxan, Melitor or Thymanax) has been shown to actually decrease cortisol levels in the body.  I stopped the Escitalopram on Wednesday, October 16 and began taking the Agomelatine the following evening.

Since these changes to my medication regimen, my observations have been nothing short of miraculous!  However, lest I be taken as a crazy woman, I decided to not only make visual observations, but to document them as well.  Here is what I have noted so far:

More perplexing yet, I documented specific body measurements (unable to weigh myself because my scale is broken and I need to buy a new one):

The above measurements are particularly interesting because they indicate a significant decrease in upper body measurements while the lower body measurement remains constant.  If we go back and look at the drawing of Minnie G., it is apparent that the majority of the body weight for Cushing’s Syndrome occurs at the level of the abdomen, upper neck, and upper arms, leaving the legs and lower body quite normal” in size. I will continue to monitor my progress in this way, but this is what I have documented and observed so far.  Moreover, I have an appointment to go see a reputable endocrinologist this month in hopes that she will be able to help me better understand my findings and perhaps help me to continue to progress in the positive direction.

Although I am extremely pleased to be noticing these changes within my body, I am contrarily deeply saddened that it took my own enormous energy and will to find things what no doctor was able or willing to find for me. In the end, I have come to the conclusion that your best doctor is often your own self.